From 4 p.m. on Saturday, 18 March we welcome everyone who is interested in Estonian culture (see programme). Before that, the events take place in Estonian language only.

This comedy, which has taken audiences by storm, dissects human relationship with money. Whether you have too little or too much, money is always topical.

Q&A with Andrus Kivirähk after the performance.
NB Only in Estonian.

2.30 p.m. “Sõida tasa üle silla” (“Driving silently across the bridge”). Poets Doris Kareva and Veronika Kivisilla recite their own and favourite texts, as well as sing.
On the one hand the classical, timeless poetry of the beloved Estonian poet Doris Kareva and on the other hand the texts of Veronika Kivisilla who is 20 years younger and started to write poetry as an adult.
NB Only in Estonian.

FROM 4 p.m. WE WELCOME EVERYONE INTERESTED IN ESTONIAN CULTURE, EVEN IF YOU DO NOT SPEAK ESTONIAN!

Ants Tammik’s documentary “A Fragile World” (OT “Habras maailm” 2016, 35′) is the young director’s and cinematographer’s poetic vision of Estonian bog landscapes. He contrasts two different worlds ‒ the irregular natural landscapes with its flora and fauna and manmade regularity. “It is important to protect such environments like bogs and marshes if only to provide us with the space to remove ourselves from the sickening daily hustle and bustle and remember that human beings are not the centre of everything in the world, but just a small part of a perfectly functioning whole,” says Tammik. “This film is meant for those who have the time to watch and think along.” An equally important part of the short film is the music composed by Aivar Surva and the beautiful sound production by Kauri Lemberg. The breathtaking images are accompanied by enthralling music and no text.
The film won the prize for best camerawork at the Matsalu Nature Film Festival in 2016.

Janno Jürgens’ short film “They Say Tomatoes Love Rock Music” (OT „Räägitakse, et tomatid armastavad rokkmuusikat” 2016, 40′), filmed in Haapsalu, the Director’s town of birth in West Estonia. “A relationship drama focusing on family relations between three generations and the way in which the new materialistic generation is prepared to get what it wants at the expense of the old,” Jürgens has said. “A more serious drama by genre.”
Synopsis: An old gentleman looks back at his life ‒ the good and the bad and the things he can still fix. The son has not had contact with his father for eight years, the daughter is impatiently waiting for the old man to die and the grandson wants to put an earthworm in a glass jar. But the old man is still resilient and keeps planting new flowers in his garden, not knowing whether his eyes will see them bloom.
Janno Jürgens has graduated from the Baltic Film and Media School and is the author of several short films which have won awards at international festivals.

8.30 p.m. Liisi Koikson’s Concert. Liisi is a beloved Estonian vocalist. Known by audiences already from the early 1990s when she won the televised singing competition “Laulukarusell” on several occasions. Today she participates in various projects and as a solo artist singing jazz, pop and folk music. At the concert in Berlin, Liisi will perform Estonian songs from her three popular solo albums. The texts and music has been written by famous musicians and writers, including Liisi herself. The songs will take us on a journey to enjoy the simple beauty of nature and unravel the complicated ways of the human heart. Liisi is accompanied on guitar by Marek Talts.

10 p.m. Cello Quartet C-JAM with Pärt Tarvas, Levi-Danel Mägila, Margus Uus and Tõnu Jõesaar introduce themselves on their homepage: „C-JAM is a unique team of men who are not afraid of broadening horizons and setting themselves remarkable challenges. The result is a blend of classical cello quartet with improvisatory big-band, occasional metallic rock sounds and the soft strains of a warm cello sound.” Due to their long career on stage, they no longer know whether they are professional rock musicians who just happen to be highly educated and esteemed classical music performers, or the other way around. The Quartet has been making music together since 2004. At home they have performed in towns and villages, beaches and bog tracks and criss-crossed Estonia. Outside Estonia they have given successful performances in Latvia, Finland, Germany, Russia, Belgium, Denmark and even China. The Quartet has released four CD albums until now. 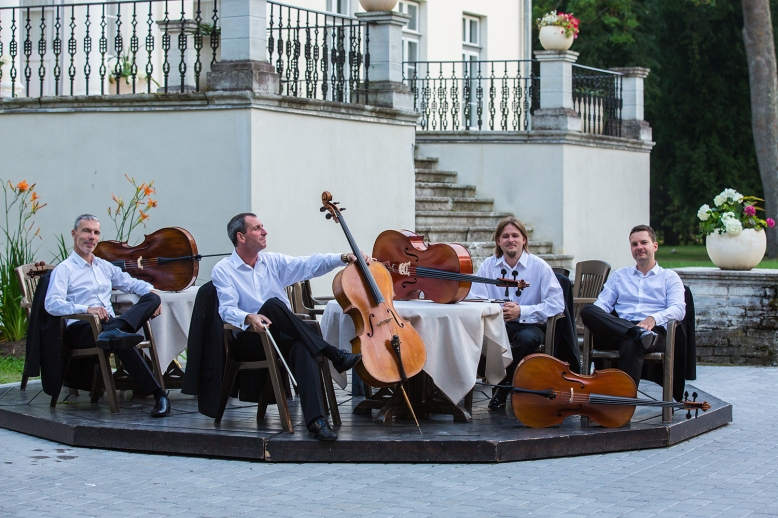 KAMA IS DEEPLY GRATEFUL TO ALL ITS SPONSORS AND SUPPORTERS!

Thank you to ACUDkunsthaus for our successful cooperation.

You can also help to create the tradition of Estonian Cultural Days in Berlin. By helping us, you are helping to take Estonian culture into the world!